William Rogers, my great-great-great grandfather on my mother's side, served in the U.S. Army during the Civil War. He enlisted as a Private on 24 Aug 1861 and was place in Company K of the 11th Michigan Infantry.

During William's enlistment, the main duty of the 11th Michigan Infantry consisted of guard duty along the Louisville & Nashville Railroad (also referred to as the L&N; the L&N spanned the Union and Confederate lines and served both sides as the war fronts changed). The soldiers were marched to Bardstown, Kentucky, about 50 miles southeast of Louisville.

William received a disability discharge on 03 Jun 1862, having served a total of less than 10 months. According to the Record of service of Michigan volunteers in the Civil War, 1861-1865, of the 1,323 men enlisted in the 11th Infantry, 265 (or 20%) were discharged due to disabilty or disease.

All of the documentation available during a cursory search on Ancestry.com, indicated that William's only service was with the 11th Michigan Infantry. However, when reviewing his record in the Civil War Pension Index available on Footnote.com, I discovered that he had additional service under Company H of the 28th Michigan Infantry. 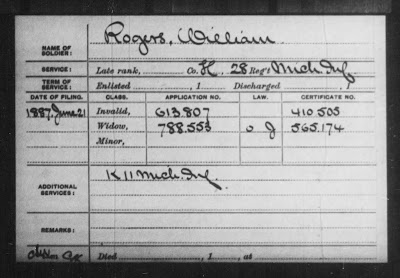 William re-enlisted as a private on 08 Aug 1864 and was promoted to Second Lieutenant on 26 Aug 1864. As a Second Lieutenant, William would have been third in command of a company and may have had his own platoon to command, as well. During his second stint with the Union Army, he saw much action, including the Battle of Nashville, fighting the Confederate forces of Gen. John Bell Hood. It was one of the largest Union victories of the war.

The Civil War officially ended on 09 Apr 1865 when Lee surrendered to Grant and William Rogers resigned his post soon thereafter on 08 Jun 1865.
Posted by Melanie Hevron at 4:19 PM

Thanks to Alice Keesey Mecoy